After deploying a bunch of drifters on Monday morning, we also deployed two Lagrangian floats. These floats are designed to sink and drift along with water of a particular density. If water was being subducted along the front in the past two days, we hope that these floats went along for the ride! Today we retrieved them to download their data. 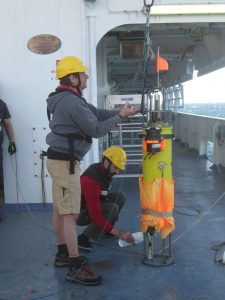 Mike and Andrey with the float, ready to deploy off the side of the ship. They are spraying the instrument with soapy water so that no bubbles form on its surface and change its buoyancy when we put it into the ocean. 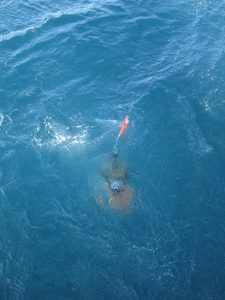 The Lagrangian float in the water 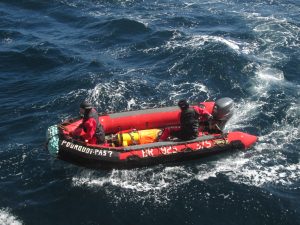 Recovery of the float by two crew members in the zodiac 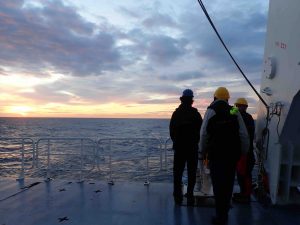 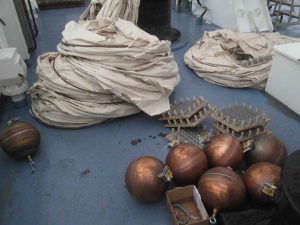 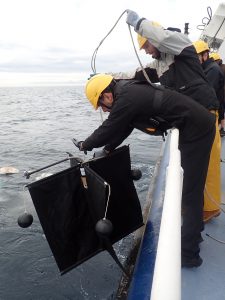 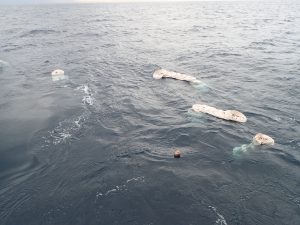 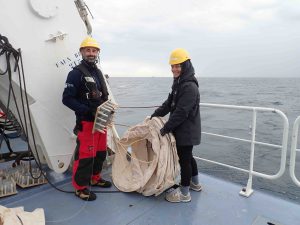 Today is a very busy day with a lot of deployments of different types of equipment. Before daybreak we deployed a wirewalker, an instrument that moves with the currents while profiling up and down to observe the upper water column. Its up and down motion is powered by the waves! It measures the flow velocity as well as the temperature, salinity, and biological variables. We hope that this will complement our many surveys by showing us how the properties of the flow evolve as we follow the front. 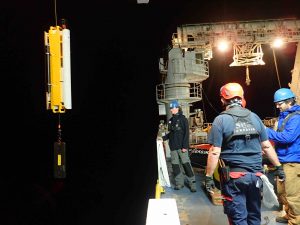 Yesterday and today, we’ve been experiencing relatively high winds, at least for the Mediterranean — around 20 knots most of the time and occasionally up to 40 knots! This has limited our ability to deploy and retrieve floats and drifters, but we’ve kept up with the UCTD and EcoCTD as much as possible, and CTDs and water sampling continue regardless of the weather! Tomorrow we’re heading west, where the waves are a bit smaller and we’ll be able to deploy more of the instruments that need recovery, such as the wirewalker and the Lagrangian floats. 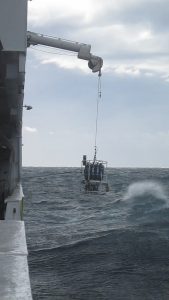 This afternoon, we tested out the V-wing, an instrument that we tow behind the ship. The V-wing is built so that it dives deeper into the water column as the ship moves faster. This means we can control the depth at which the V-wing takes measurements by moving the ship faster or slower, or by changing the length of the cable that attaches the V-wing to the ship. The V-wing has an ADCP to measure current velocities, and we can also add instruments to the tow chain such as a CTD. 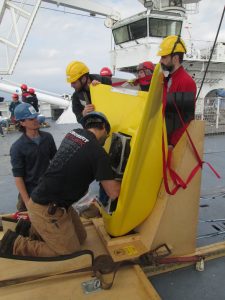 Ben, Ray, Mat, and Andrey working to assemble the V-wing 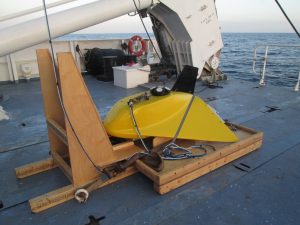 The V-wing ready to go into the water 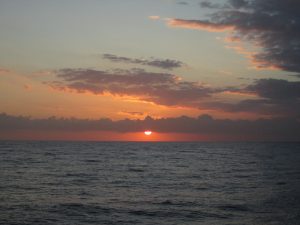 A nice sunset, one of the perks of oceanographic research cruises!

This morning we took a tour of the engine room and saw the multitude of important machines that keep the ship running. We learned that the ship uses diesel generators to power electric engines. This sacrifices some efficiency but lets us change direction quickly, which we need for scientific research! We also saw some very large ropes and cables. 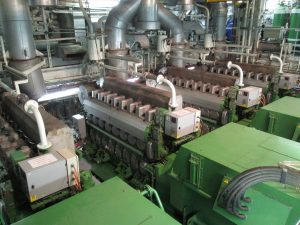 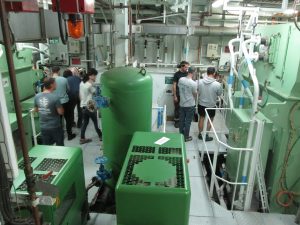 Green seems to be the color of choice 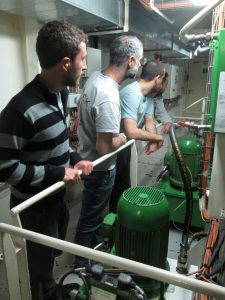 Checking out the autopilot controllers 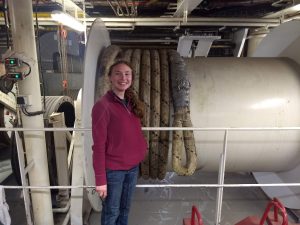 Microstructure profiles from the N/O Pourquoi Pas? are done! This instrument, operated by Francesco Falcieri coming from an Italian Institute based in Venice (CNR-ISMAR), will be moved onto the RV SOCIB during our port call in Almeria on April 3rd.

The profiler free-falls vertically through the water column to measure very small vibrations at scales of centimetres. Scientists used those measurements to infer turbulence activity in the ocean that mixes water irreversibly. But the profiler also measures other variables, such as temperature, conductivity, turbidity and fluorescence. We collected 43 profiles over this first week – with more to come from the RV SOCIB! 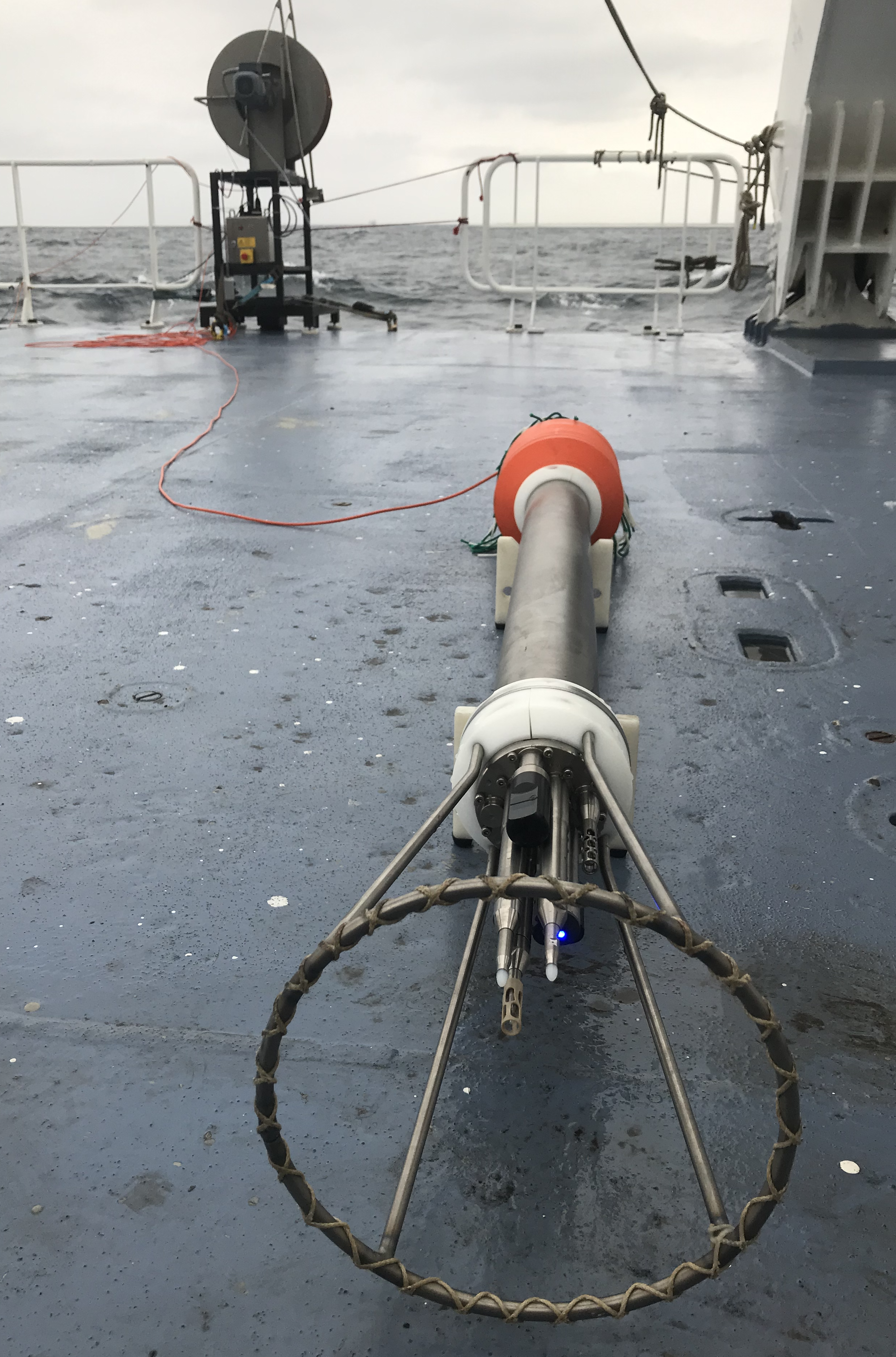 The Microstructure profiler with all its sensors. 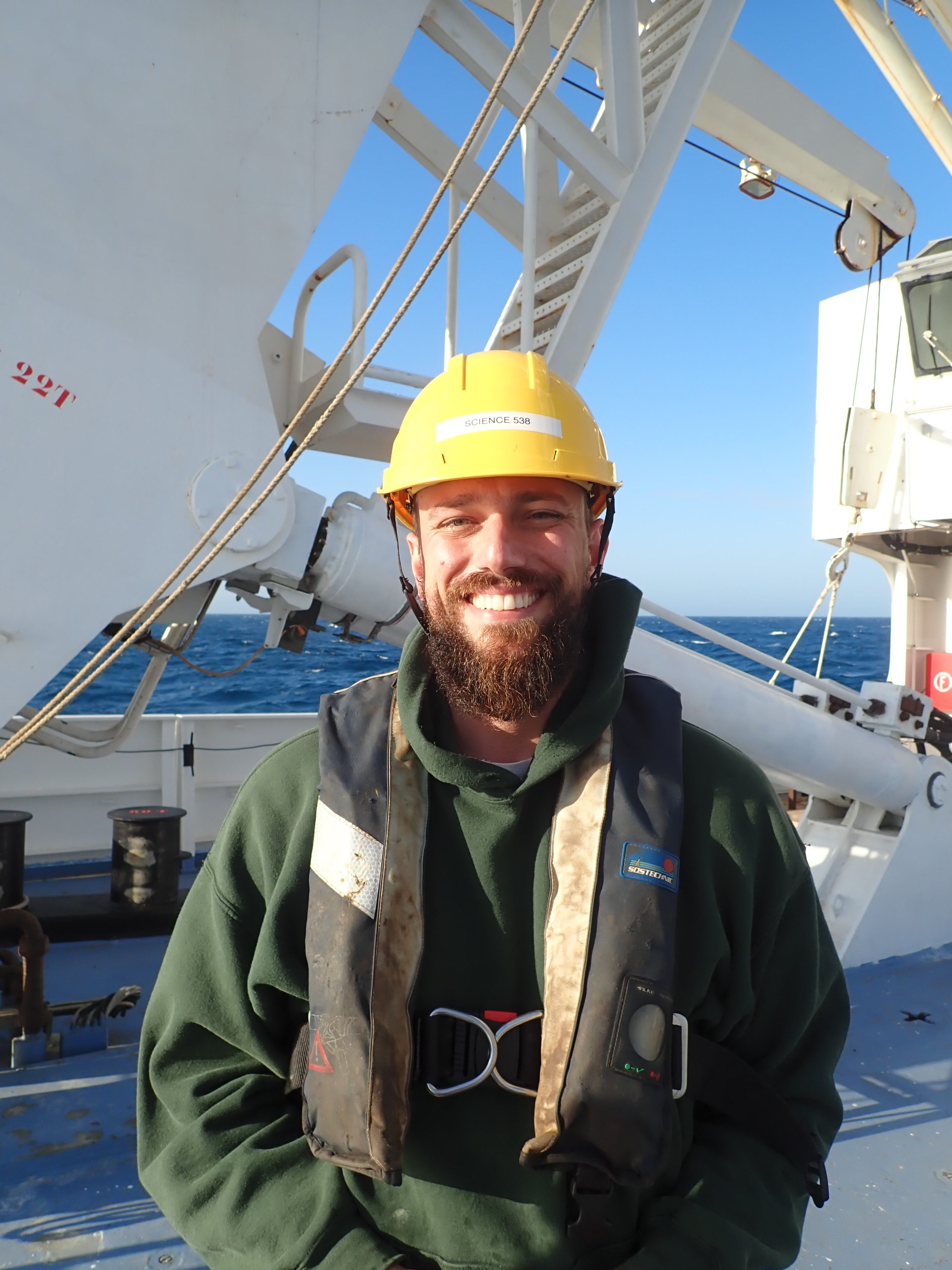 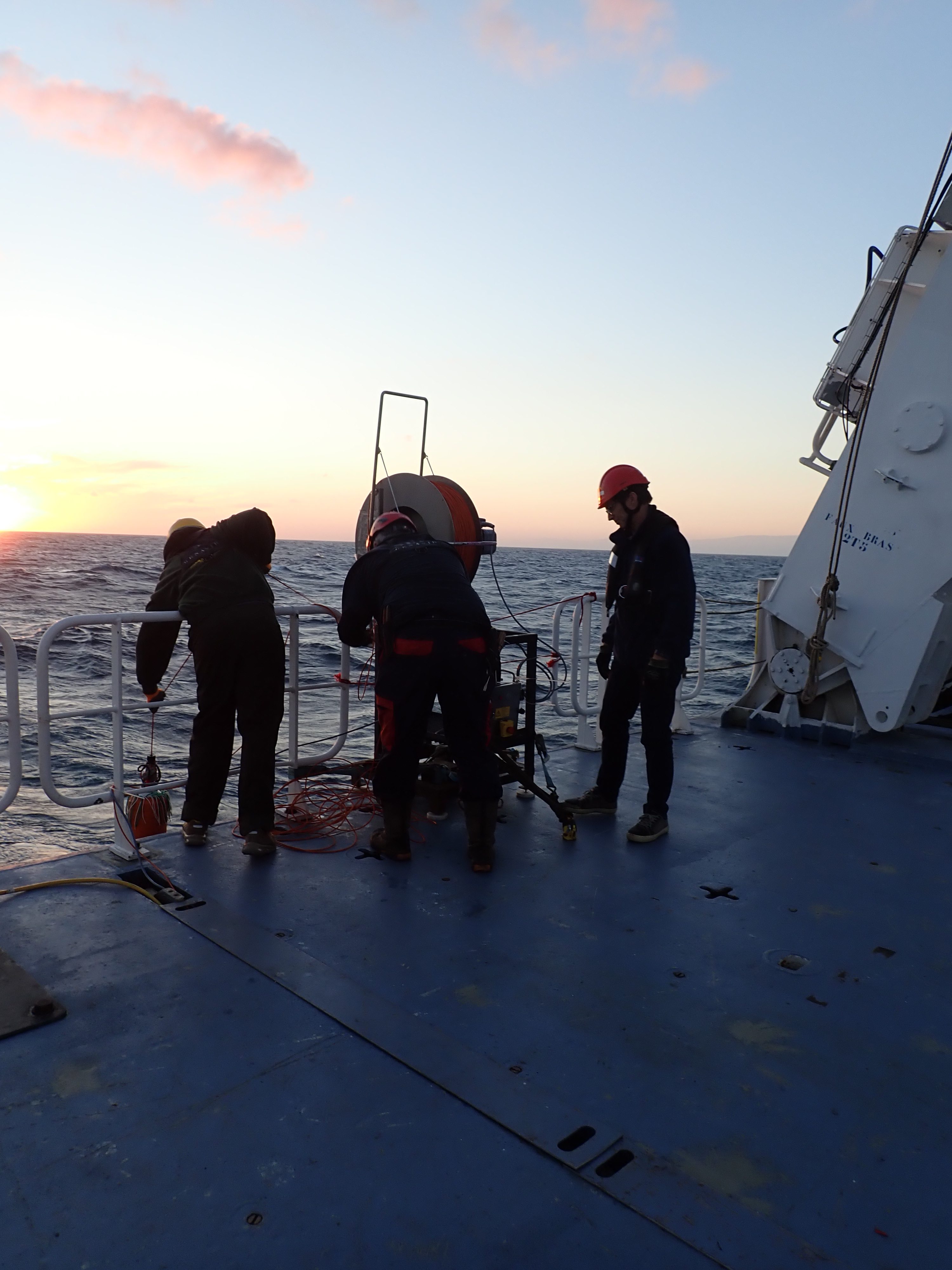 Today we recovered an OGS ADCP drifter after releasing it yesterday morning. This drifter moves with the currents, measuring current velocities along the way to give us more information about how the water is moving in this area. Since the Pourquoi Pas? is so large, the crew lowered a zodiac over the side using the crane so Pierre and 3 crew members could retrieve the drifter. 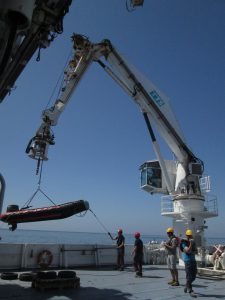 Using a crane to lower the zodiac over the side 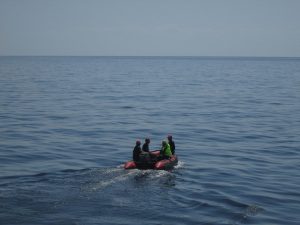 Heading out to retrieve the drifter 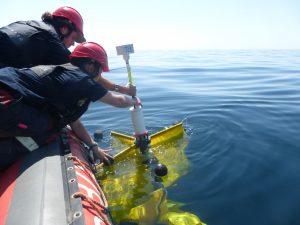 Pulling the drifter from the water 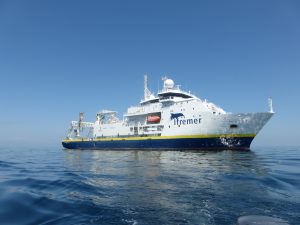 A nice view of the Pourquoi Pas? from the zodiac